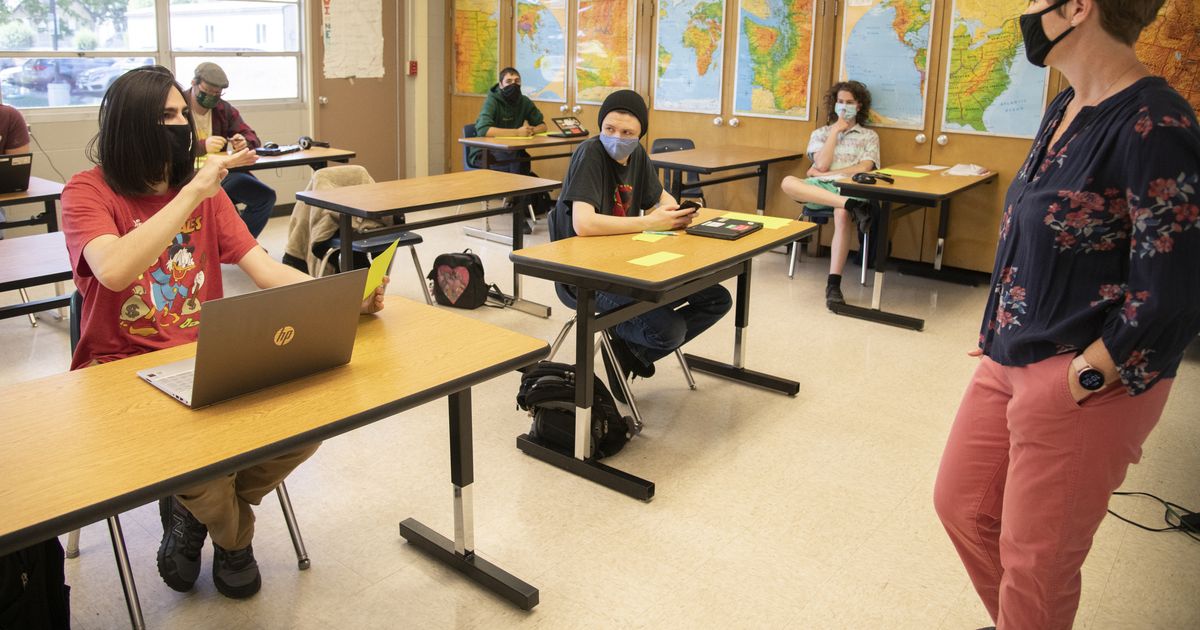 A podcast tells the story of a mother who arranged a blind date for her son, an embarrassing mistake, at least she thought based on his reaction. However, their leap eventually led to that date, then marriage and three grandchildren.

“Before we did the interviews, we talked to them for a few hours to get to know them and we did fun games like what would you bring to a deserted island?” Said Burchett.

Last quarter, 30 junior and senior students at Spokane School split into small groups and spent several weeks recording the virtual visits with one or two of the older adults they were matched with through a pilot called Writing Across Generations .

Meanwhile, everyone was writing reflections in magazines looking for stories that they could turn into compelling podcasts on a common topic that eventually became “My Favorite Mistake” with podcasts now available online.

Once they identified a story, students began cutting raw audio into something with conflict, rising plot, climax, and resolution. They added narration, sound effects, and music, some of which was written by the students. On Wednesday, the class listened to almost full renditions of the students’ projects and provided feedback on writing, editing, and audio quality.

Writing Across Generations was led by the Retired and Senior Volunteer Program of Spokane County in partnership with Community School, a project-based learning site from Spokane Public Schools that connects students with multiple community groups. Students and their teachers hope the podcast series will air on Spokane Public Radio in the coming weeks.

Denise Giblin, 71, lives in Spokane and met virtually with Burchett’s student group along with another senior, RSVP volunteer John Spencer.

“I’ve always worked with older adults because my masters degree was in gerontology,” said Giblin. “When I signed up for this project I thought I wanted to reach a different generation and this was a really nice experience because when I looked at the tapes after the sessions, I noticed how many times I laughed.”

“The students brought a new way of looking at things.”

It was her story that became “Blind Date” after talking about a chance encounter years ago when she met a young woman who had a lovely smile and then found the courage to ask her if she was one Would consider date with her son. He had just returned home from the military at the time, and that was after his twin sister died.

“I felt bad because he was having a hard time getting into the world of social connections. He was kind of lonely, “Giblin said. Then she laughed. “I thought it would help him when I told him I was going to set up this blind date and he said, ‘Oh, Mom, why did you do that?’ So I said, ‘You don’t know who you are, you don’t have to call.’ He didn’t say anything more, so I thought he would let it go. “

But later he told her that he had actually called, they had made an appointment and he liked her and her beautiful smile. “I noticed her because of her beautiful smile, too,” Giblin added. “She had that winning smile and continues to do so to this day.”

The student team she met were also very grateful for the time she spent with RSVP volunteers, which surprised her. “They actually got into it and really enjoyed the story I told.”

Both the students and the RSVP volunteers were encouraged to keep a journal after each virtual session. The sessions initially lasted about two hours once a week, then about an hour a week.

“Much was written and a diary was kept; That’s how it started, ”said Nate Seaburg, the community school teacher. “Then when we talked about 21st century technology, it morphed into something that I think would be more engaging for students and representative of how stories are told today.”

“You’re still writing something, so it’s a collaboration of everyone working on the same questions that 10 podcasts will make in a season, and that question is my favorite mistake.”

Seaburg would like to work together again on the RSVP project in the future. “Ultimately, the heart of this is this connection between students and our community partners.”

The students were at school two days a week, so their virtual meetings with the seniors took place at home. Their attendance at all meetings was 100%, Seaburg said. He is the team teacher for the group with Bobbi Konshuk, who worked with about 15 of the students on Tuesday while listening to podcasts to refine before completing on Friday.

Seaburg said he noticed towards the end of the project that if students were already advanced in one, such as technical knowledge, they had grown in the other two skills.

Around three to four students worked together per podcast.

For a podcast entitled “Overlander”, a senior RSVP woman shared about a trip to Africa with her husband. Her vehicle got stuck in a tar pit. They had made the mistake of taking the wrong turn and accelerating to lower the vehicle lower, but the couple learned to rely on the community around them to get out.

Ashton Arnold, a senior at the community school who endorsed this podcast, said the experience taught him how to create a high quality podcast while working more as a leader with other students rather than taking on the bulk of a project.

But Arnold said a general lesson for him was to learn that regardless of differences like age or politics, you can always connect with someone. And the meetings were fun as everyone was more comfortable sharing.

“It was nice to talk to someone and be open with someone else who is different and the same and to talk to someone who has a lot more experience in life than me,” said Arnold. “Because right now this is my life for the next two weeks, so the things that are happening now feel huge, even though they may not be nearly as big as they feel.”

“It was interesting for me to be making plans for the future right now, just talking to someone who can say, ‘Don’t worry about your future plans,’ go with the flow because for the most part these are loose plans , and 90% of them will be undone by the fact that life happens. “

Catering Perception – All Market Speak episodes at the moment are...

From Adam Buxton to Griefcast, What Are the Final Podcast Episodes?...